On a cold, rainy day in May 1862, a young Union soldier, Henry Alexander Scandrett, would experience his first battle. Unfortunately it would be a losing battle. His regiment, the 70th New York, joined the attack on Confederate lines at Fort Magruder, an earthen redoubt two miles east of Williamsburg. The regiment saw heavy action; 350 men were killed or wounded. A small group of survivors, including Scandrett, were taken as prisoners of war and held at William & Mary (VA).

Writing in his pocket diary, Scandrett’s first entry on May 5, 1862 begins with a significant announcement:

"Was in my first battle today. About 1 Oclock P.M. our regiment was marched into the field about. We were thrown in advance and through some blunder was not reinforced. We have lost all our company officers and our field officers are all wounded. With fifteen others I was taken prisoner and am now in William & Mary college."

Every once in a while, we get a note from a reader who tells us about how and why they love their library, and the unique things that go on at their local branch. This submission is from Ginger, a teacher at the Dewey International Studies School in St. Louis, MO. Her local library participates in a knitting program that benefits local students. This is just an example of the awesome things that libraries and librarians do throughout this country every day. Her story follows below:

"My name is Ginger, and I am a teacher at the Dewey International Studies School in St. Louis. I love the library! I frequently visit the Spencer Road Branch Library in the St. Charles City-County Library District in Missouri. It was there that I discovered the Chemo Caps group and decided to join.

Although the antiquated tradition of people sending locks of hair to their loved ones died out in the 20th century, the Lilly Library (IN) has acquired notable locks of hair since the library's establishment in 1960.

Among the books and rare manuscripts in the Lilly Library are collections from authors Edgar Allen Poe and Sylvia Plath. These collections also include locks of their hair.

Reference associate Sarah Mitchell said J.K. Lilly Jr., the library’s namesake, collected the Poe hair. The Poe collection was acquired in 1956 before the library was even built.

“It’s really interesting,” she said. “I mean, it’s something that either really grosses people out or really fascinates them.”

For nearly two decades, Roanoke’s Lesbian, Gay, Bisexual and Transgender Memorial Library (VA) has been shuffled from location to location, settling for a few years in a business or storefront only to be closed and moved again.

But on Thursday, thanks to the efforts of a group of volunteers, the large collection opened as a public research resource in the Roanoke Diversity Center.

Gregory Rosenthal, a Roanoke College assistant professor, co-leads the Southwest Virginia LGBTQ+ History Project, which works to research and document regional LGBT history. Volunteers with that project worked for more than a year to create an online catalog for the library’s 2,700 volumes, Rosenthal said.

“The books have been pretty much inaccessible since, hard to say when,” Rosenthal said. “It’s probably the fifth time it’s been reopened now.”

Rosenthal said the collection will be open for research use only during the center’s open hours, from 4 to 7 p.m. Wednesday through Saturday. Volumes will not be available for checkout.

The exclamation point on the Boise Public Library sign jumps out at you.

It’s now a city icon but when it was first unveiled in 1995, Dave Bieter was not a fan.

“I thought, ‘What self-respecting library needs punctuation? … If you’re a great library, you don’t need punctuation,” Bieter told a crowd gathered recently for the monthly storytelling spectacular “Story Story Night.” The theme for the night was “!” — and the library sign was the inspiration for a whole season of punctuation-themed shows, said Story Story artistic director/host Jodi Eichelberger.

Bieter was elected mayor in 2003 — and the library sign was on his agenda.

Dec. 7, 1941, is a date ingrained in the minds of most Americans, marking the attack on Pearl Harbor and the inexorable entrance of the United States into World War II.

At the time, Yakima (WA) was home to just more than 27,000 residents, and only a few weeks earlier, on Oct. 24, 1941, the Yakima Public Library had made its own, much more pleasant sort of history — by debuting the city’s first bookmobile.

Officially known as the A.E. Larson Traveling Branch Service, the Bookmobile was funded through donations and had taken two years of careful planning and negotiation to bring to fruition.  The new service was met with eager patronage in each of the neighborhoods and schools it visited, and staff enjoyed getting to interact with the public in a “personal and neighborly way.”

For head librarian Helen Remsberg, the only downside to the service was that because so many children frequented the Bookmobile, staff were often hard-pressed to provide one-on-one attention.  But this, she conceded in one of her library reports, was a lovely problem to have.

t’s up to Lisa Chille  to steer the boat in the right direction when she races with the Harvard Heavyweights (MA). In her role as coxswain on the crew team, she gains the trust of her teammates, harnessing their power and coordinating their movements toward a successful finish.

Chille arrived at Currier three years ago with a background in computer science, physics, chemistry, math, and music. Writing papers in the humanities presented a brand-new challenge. House-wide emails from Alexis Gomez, a Peer Research Fellow, invited residents to stop by and get help with assignments.

“Having a friend who’s not a teacher or a teaching assistant saying ‘I can help out’ was such a huge resource for me,” Chille said. “I wanted to do this for other people as well.” Now a computer science concentrator with a secondary concentration in music, Chille teaches her peers how to navigate library resources and connect with librarians.

The Reading Public Library (PA) is the place Porshia Maldonado goes to escape the bustling city outside.

The 24-year-old Reading resident, who said she tries to stretch her budget as far as possible, spends a few hours each day working as an online mystery shopper from the computer lounge or scanning the bookshelves for interesting titles.  "This is probably my favorite place in the whole world," she said. "I love coming to the library."

Maldonado is not alone.  It may seem strange, but it turns out the biggest users of public libraries today are millennials like Maldonado.

A national analysis from the Pew Research Center found that 53 percent of millennials, people ages 18 to 35, have used a public library or bookmobile within the last 12 months. That's compared with 45 percent of Gen Xers (ages 36 to 51), 43 percent of baby boomers (ages 52 to 70) and 36 percent of people in the silent generation (ages 71 to 88).

In West Ashley’s Avondale neighborhood, an alley behind the shops and bars near Magnolia Street has become an outdoor exhibition space filled with large and small murals. Artists have painted images ranging from an enormous turkey vulture to small cartoon-like figures on the sides of the buildings.

On the Charleston peninsula, three murals by Shepard Fairey and several more on Huger Street by a variety of artists can be viewed. David Boatwright’s work — part art, part commercial signage — is scattered throughout the downtown area.

In Columbia, a growing number of murals and sculptural pieces are adding a colorful dimension to a city so enthusiastic about public art that it has a dedicated nonprofit organization whose main purpose is to facilitate more of it.

This deliberate approach adopted by Columbia now is taking hold in the Holy City where efforts are underway to introduce more curated public art to the shared environment, and not just downtown. 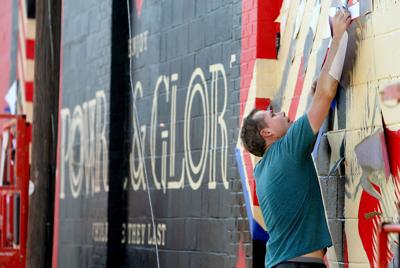 One advocate is even calling for a “1 percent for art” program that would set aside money in every public building construction budget for the purpose of procuring artwork.  “I love public art,” said Mark Sloan, director of the Halsey Institute for Contemporary Art. “It does serve a vital role in terms of meeting people where they are. It’s in the public way; you have no choice.”

J.C. Geiger’s “Wildman” is a coming-of-age saga about a young man with a fondness for the trumpet whose road to success in business seems a foregone conclusion, even though he has barely finished high school.

Instead, on the way to what has been billed the ultimate graduation party, he gets stranded in a ramshackle town with a dive bar and a cheap motel and finds adventures with a posse of offbeat characters, downing shots, jumping trains and even revising his wardrobe.

It’s an odyssey that mirrors the author’s search for himself, with the common thread being the 1993 Buick Century that breaks down as the main character, Lance Hendricks, is ever so close to reaching an event that promises to reward him with a significant rite of passage.

Geiger was in the Century when it broke down as he was traveling home despondent following a writing conference, stranding him in rural Washington state at a town with a dive bar/roadhouse/motel.

“It happened at this major turning point in my life. I was pretty much broke. I thought I was going to give up on writing. I didn’t know what was coming next. And while I was there, stuck with my broken-down car, I basically started writing the outline of the book that would become ‘Wildman.’