by Katherine Esten, courtesy of The Massachusetts Daily Collegian

The following information was sourced from “The Campus Guide: University of Massachusetts” by Marla Miller and Max Page, an online university wiki page, and archived issues of The Massachusetts Daily Collegian.

The history of the University Library 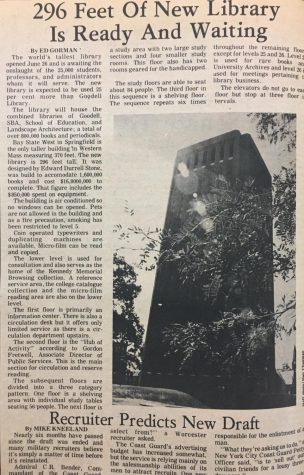 Now a centerpiece in the UMass skyline, the library is the antithesis of counsel given to the University founders in 1866 by the father of American landscape architecture, Frederick Law Olmsted. As written in “The Campus Guide: University of Massachusetts” by UMass professors Marla Miller and Max Page, Olmsted urged Massachusetts Agricultural College to only build low, small buildings.

“….in the midst of an open agricultural country….a straight-sided, evenly-balanced, many-storied structure of stone will not be merely incongruous to the landscape, but will certainly impose an unnecessary inconvenience and fatigue upon those who are to occupy it,” Olmsted wrote.

However, as the MAC grew in size, eventually becoming the flagship campus of the UMass system under its current name, the architectural ideals of low-level structures were incompatible with student needs. In 1963, Keyes D. Metcalf, a library consultant and librarian of Harvard University, suggested that UMass would soon need a 310,000 square foot library within the next 10 to 15 years.

In 1965, UMass provost Oswald Tippo and President John W. Lederle, the namesake of the Graduate Research Center, selected an internationally-known architectural firm, Edward Durell Stone, to begin designing a new library. The original design of the library proposed 28 stories, and was approved by the Board of Trustees in 1966.

The “great concrete pour” of September 1969 saw 2,600 cubic yards of concrete make up the foundation of what would eventually become the University Library, replacing the main campus library at the time, Goodell Library. Two years later, the exterior work of the building was complete. Topping off at 269.5 feet, the University Library, alternatively called Library Tower, was then the world’s tallest library, according to the Guinness Book of World Records.

Interior work continued for another two years. On June 26, 1973, the new University Library formally opened and a formal dedication ceremony took place over a year later in October 1974.

Returning to campus in September 1973, students had much to look forward to in their modern, state-of-the-art library. A Sept. 7, 1973 Daily Collegian article by reporter Ed Gorman said the new library was expected to be used “25 percent more than Goodell Library.” In addition to air conditioning, the library featured coin-operated typewriters and duplicating machines. The fast elevators didn’t stop at each floor individually, but at “three floor intervals,” with each third floor serving as a shelving floor.

In its early years, the building caused safety concerns on campus. The brick exterior, chosen as the less expensive option in comparison to limestone, had slight chipping by September 1973. By 1979, Chancellor Henry Koffler ordered a temporary closure of the library until a new entrance and other safety modifications could be introduced. In February 1980, the University Library was restricting use to no more than 500 persons at one time.

Interior renovations began in April 1985, and during the 1986-87 school year, staff, student volunteers and other groups helped to clean, paint and refurbish the interior under umbrella operations called “Mass Transformation” and “A Class Act.” This initiative started the practice of murals inside the library stairwells in a beautification project. Once the building was permanently reopened, it returned as the center of academic and social life at the University. 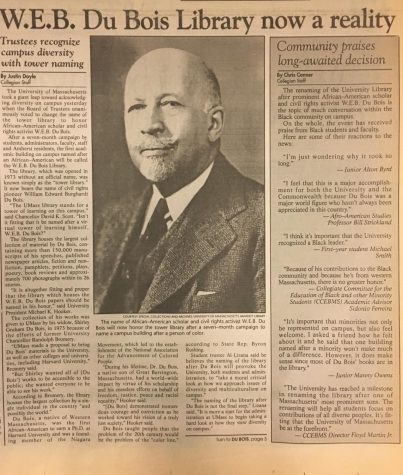 In the spring of 1994, a coalition of students, known as the “Petition Coalition” began campaigning to give a new name to the Library Tower by naming it after American civil rights activist W.E.B. DuBois. DuBois, a civil rights activist and native of western Mass., was tied to the library through the donation of his papers by his widow.

Initially, there was debate over the appropriateness of the name, due to DuBois’ ties to the Communist Party in the United States. Further, University policy dictated that dedications were intended for individuals who had made significant donations to the University.

“DuBois is a major American intellectual of the 20th century and the University Library houses the largest and most distinguished collection of [DuBois] materials in the world,” Scott said.

By Oct. 6, 1994, the W.E.B. DuBois Library became a reality following a unanimous vote of the Board of Trustees. Then-student Trustee Al Lizana told the Daily Collegian the naming of the library “[was] not the final step,” but was a “start for the administration at UMass to begin taking a hard look at how they view diversity on campus.”

Lizana continued, “Diversity is more than just recruiting students of color to come to UMass. It is also making the environment reflect something which the students can relate to.”

Students on campus celebrated the decision; on Oct. 7, 1994, a letter to the editor of the Collegian from graduate student Prasad Venugopal said it was a “great honor” for the University to join millions around the world for whom “the legacy of [DuBois] has served as a guiding light in their quest for equality and social justice.”

On Oct. 11, 1994, another letter to the editor from Esther A.M. Terry, the chair for W.E.B. DuBois Department of Afro-American Studies praised the decision to rename the building and noted it would be accompanied by an “upgrading, enhancing and restoration of the library.”

While its size was unprecedented in terms of university libraries in 1969, the W.E.B. DuBois Library holds over eight million items today, a fraction of the entire collection. According to Miller and Page, a “good portion” of the library collection is in a former Cold War era bunker now known as the Five College Book Depository.

Robert Cox, the head of special collections and University archives at UMass Libraries, said in an email that while he didn’t use the library much as a science undergrad, he’s become a “real convert.”

“Modern libraries aren’t a single thing, really, they’re a complex, evolving, multifaceted organism that connects nearly every part of campus to each other,” Cox said, adding that the library has partnerships with units across campus to “provide a full spectrum of services to students, faculty and the public.”

According to the 2016 Library Report, 1,762,263 visitors came through the W.E.B. DuBois Library and the live feed of the falcons who live on top of the library, Falcon Cam, received nearly 180,000 views.

“Maybe it’s not for every student, but it is an important place for many,” Cox said.