by Brian Whitehead, courtesy of The San Bernardino Sun

Every weekday morning, four female cats anxiously await the contents of a Ziploc bag Milor High School (CA) library tech Lisa Natoli retrieves from a cupboard near her desk.  When the cat food hits the asphalt, the felines swarm.

The number of stray and abandoned cats on campus used to be higher, but many have found new homes. Natoli speaks affectionately of Jelly, the white runt she saved from the heat last summer. Milor principal Andres Luna, too, adopted a cat, a queen that somehow found refuge for her four kittens inside his office a couple years back.

Milor, a continuation school in the Rialto Unified School District, is one of many high schools in the area with feral cats roaming campus.

English teacher and Cause for San Bernardino Paws founder Angela Halfman hopes by involving staff members, students and, ideally, other schools in their rescues, she can raise awareness of the ethical and humane treatment of these colonies. 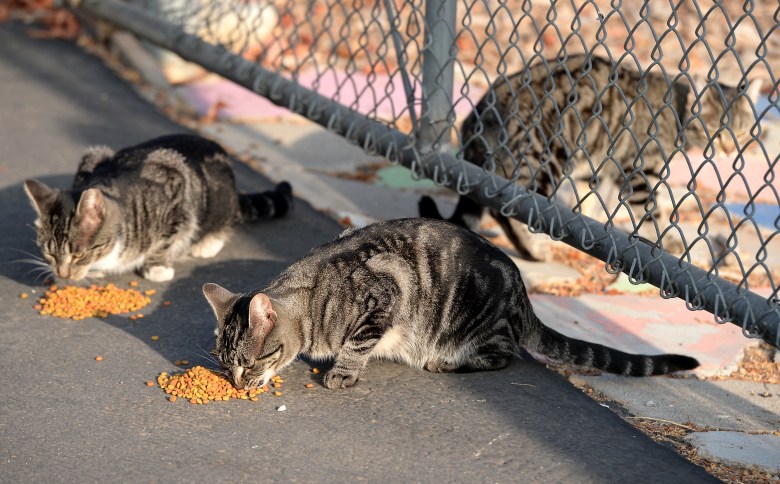 In partnership with Upland-based Daisy’s Hope Foundation, Halfman and her colleagues trap feral cats, have them neutered or spayed and either return them to their habitats or find them permanent homes.  Four have stayed on campus, living luxuriously in a gated garden near the library.  “They’re a part of the school,” senior Ryan Vazquez said.

“We want to teach kids about being of service in any facet of life,” added Luna, who named his mama cat ‘Mustang’ after Milor’s mascot. “These cats seem like wild, discarded cats, but they play a role for us. They’ve brought awareness to me and to our students.”

In recent years, Milor’s feral cat population has grown, in part, due to unaltered, male neighborhood cats that find their way onto campus.

Litters are born into homelessness, never have human interaction and thus become feral and continue the cycle, Halfman said. Colonies can be found at schools, hospitals and anywhere else cats can easily access food and shelter. These populations present public safety issues if not addressed properly, Halfman said.

Some Milor staffers and students have seen starving kittens, kittens killed and injured by automobiles and dead kittens, Vazquez said.  “It’s tough to see,” he added, “especially for students who love animals.”

Daisy’s Hope assists with trapping and transporting new felines on campus to the vet for spaying and neutering, deworming, vaccinating and flea and tick treatment. Vetted feral cat colonies, such as the small one at Milor, help keep away other species of animals that can carry diseases easily transferred to humans, Halfman said.

They also protect their territories from other feral cats.  “Best of all,” Halfman said, “an altered cat colony ceases to reproduce and multiply, which has eliminated the suffering of kittens.” 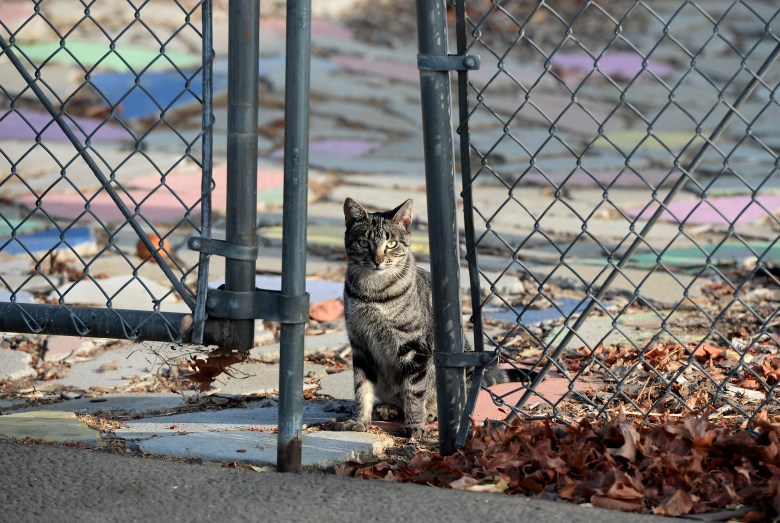 Halfman, who’s been working with area rescues since 2005, sees an opportunity to add cross-curricular projects such as this one to the core curriculum and common core standards in English, math and science.

Last year, her students assisted in the trapping of felines and observed their release after they had been altered. The teens were amazed by the time and money spent on treating wild cats, Halfman said.  “It was a great mini lesson,” she added, “on why we bothered, why it mattered and how it affected the future, as well as the neighborhood.”